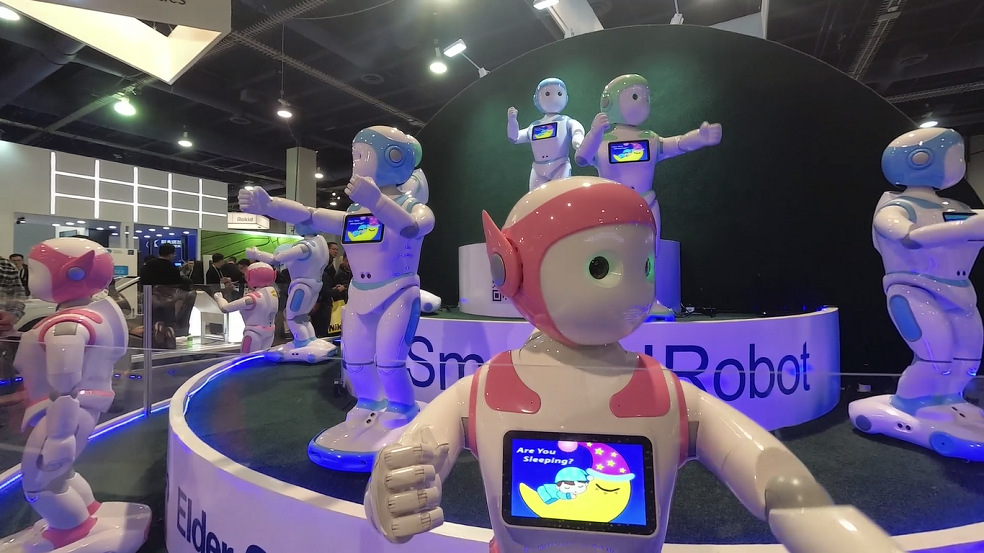 Almost 160,000 accredited members were striving to get back to normal life after 4 days of networking, strolling, interviews…and Las Vegas infamous parties, while long puddles still resist to evaporation. Yes, rain was a surprise guest of this edition, causing chaos (breakdown of escalators, embarrassing falls, thaw of hair cream, ...). Even Google has been forced to temporarily close its exhibition stand.
Our 70,000 wet steps (we did not count the slips) still allowed us to detect some major trends of the year 2018.

The French are proud of their little robots: Buddy - whose design approaches that of Pepper, but whose arms and eyes are reminiscent of manga characters. And Keecker who has the form of an acorn detached from all anthropomorphism. Put side by side, it looks like the distant descendants of C3PO and R2D2.

These wonders of technology are interfaced with connected objects - whose mass production has just begun -  and are able to monitor the home of their owner and alert them in case of problems. But the competition is tough against Asians who offer a whole zoo of small robotic beasts declined in all forms, from the "cat cushion" companion for the elderly, to "cobots" - industrial robots capable of collaborating with humans.

Rise of the AI's

"Artificial Intelligence" : these words were repeated like a mantra, until they lose their meaning. There too, the Chinese have a massive presence: the purchase of Kitt.ai - which publishes a natural language analysis solution - by Baidu, the Chinese Google was on every lips. The Asian market has taken the lead on the Machine2Machine and now offers a range of objects capable of communicating on major platforms like Alexa Amazon.

The other big winner of this show was certainly Google Assistant. Built into a wireless speaker that allows to charge a smartphone, equipped with a camera in Google Smart Display and embedded on Android Auto, Google's AI has caught up on Alexa. The media has relayed it, and partnerships are convincing. But the resistance of the French tech is organized, supported by EDF which presented solutions like Snips. The vocal solution affirms itself as the new form of unavoidable interaction. Its association with new types of screens like the Google Smart Display or Echo Show increases its impact. In short, the voice redefines traditional interfaces.

Smart is good and beautiful

The nice surprise of this show? More and more coherence between SmartHome, SmartCity, SmartMobility and SmartEnergie. As explained in the Ford Keynote and beautifully illustrated on its stand, the subject must be taken as a whole to express its full potential.

Jim Hackett, the manufacturer's CEO, presented a holistic, almost cosmological vision of the car of the future, putting it in a great urban redevelopment plan to live more freely and healthily. While urging his audience to participate in this new transport utopia, he explains why bringing back streets and roads into the collaborative economy space can enable the city to self-reconfigure and save lives. A very ambitious project.

VR : between vanguard and deception

Only (small) disappointment: alternative realities are still a bit frustrating. Technologies are struggling to provide to users a fluid and seamless experience. Will the 5G announced at the show be the solution? We still tested the collaborative VR that promises a bright future, and we look forward to the release of the Google and Lenovo helmets, scheduled for the second quarter of 2018.

See you on next year !